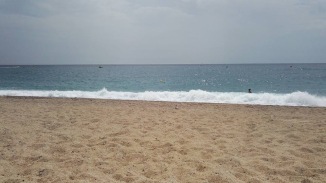 Having left behind the wonders of Calella, G and Grimble reflected on the resort and the experience. There was no doubt that the Costa Maresme was attractive and the temperature palatable. They had a great time but possibly wouldn’t consider returning. Why not? Well much as Grimble loved a good shop, the shopping street was excessively narrow and exceedingly overcrowded. If this could have been avoided, all well and good but it was also the location of many of the best restaurants. Frequently, G and Grimble would be battling with the onslaught of shoppers and they sought out their evening repast. In addition, the shops closed at an unnaturally late 11pm, meaning this crowd situation was slow to subside.

One of the frequent criticisms of this area is the rail line that breaks the shore line from the town. However, this did not bother the intrepid G and Grimble. If anything, this enforced segregation of the town from the beach gave the beach area a serenity lacking elsewhere. In fact, the promenade was a lovely area to walk. The beach itself was not as the guides promised. Allegedly, the sea was calm and the beach inviting. Grimble was not sure how the sand texture of crushed pebbles that felt like a thousand shards of glass underfoot was conducive to feeling harmony. Escaping to the sea was one option. Clear it was, calm it was not. So now Grimble had the dual task of attempting to make her soles less painful whilst being pulled out to sea. At one point, G was tumbled over by the ferocity of the waves which entertained Grimble until she too fell victim to its power.

Everyone knows that the purpose of the sea is to act as nature’s toilet. When pee comes upon you, there is a swift run into the waves, a release and return to shore. However, the Calella coastline offered no such swift relief. The time it would take negotiating and suffering the painful pebbles and the crescendo of waves ensured that this part of the coast was not a wee depository. Thus sunbathing here was less than relaxing especially as shoreline toilets were non existent.

As G and Grimble stood by at the Waves’ edge once more with G debating a dip, there were loud shouts from some Spanish youths behind them. To be honest, in Spain this is hardly unique, where the Spanish can turn even a simple request for the time into a full on, decibel raising, ear drum shattering encounter. However, them running down the beach, which mystified Grimble anyway as to why their feet were so hardened to the surface, throwing rocks and boulders into the ocean seemed somewhat unfriendly. They jabbered at an alarming rate and pointed wildly, at which point G and Grimble became aware of a very large, purple edged jellyfish about ten feet away from them. The lads were kindly trying to deter the floating bubble of sting away. In the event of anyone getting stung, Grimble knew that she had the natural cure with her now overinflated belly of pee. In fact, secretly she hoped that this would be the relief that she needed.

Another debatable point of this Costa was the weather. Now G and Grimble had selected this area because the temperature was significantly cooler than the South, but warm enough to be ideal. However, they had not accounted for the proximity to the mountains which helped with this fresher feel but also brought significant daily downpours. So it was that their parasol multi tasked as an umbrella as they sheltered from the deluge. As the rest of the hopeful sun worshippers thrust their beach paraphernalia under arm and ran for shelter, Grimble argued that it was still warm and the rain had the same quality as the sea in that they were both wet. So G and Grimble had the beach largely to themselves during downpours which was nice. But, as all English people know, they didn’t go on holiday to see rain, however warm that rain was.

Given the trials at the coast, G and Grimble had the option of the hotel pool. This was a lovely spot but again had some issues. Of course there was the Gilbert Grunts whose fierce stares had disturbed their music listening earlier in the week. G and Grimble had later learned as they listened to them bore some unsuspecting Dutch tourists that the reason for the death stare was not exclusively their music choice but it was territorial as the Grunts had holidayed in Calella, at the hotel Mediterrani Express, for 31 successive years: same hotel, same weeks, same spot. Looking at where they ideally plonked themselves, it was clear that on the first day, G and Grimble had inadvertently invaded their land.

Mr Grunt was an expert on Calella. Well in his own head he was. He’d been coming to this same hotel when the current owner, Pol, was a babe in his papa’s arms. However, as Mr Grunt tirelessly droned to the Dutch, who clearly wished their superb language skills had not equipped them with the ability to communicate with the English, he knew all that was needed to know about this small seaside town. He knew the best bars, the best food, the best prices. This seemed at odds with his life style whilst here where he seemed to dedicate himself to the same area of the pool and the excessively over priced drinks and snacks from Pol’s fridge and not venture into the wider world. This was the other point of consternation from the cost conscious Northern Grimble. The ridiculous prices for drinks and the hand written sign, in several languages, that prohibited any self bought food or drink, including bottled water by the pool area.

Had the mark up been reasonable, Grimble would have been happy but bottled water selling at the nearby Spar for 80 cents and 2.50€ by Pol, whilst small canned shandy weighed in at a hefty 2.50€ made her blood boil. It was excessive and a rip off. So despite the location being great, the room well equipped with a fridge, were G and Grimble to venture to these parts again, they would not be like the Gilbert Grunts repeating ad infinitum the same holiday and lining the canny Pol’s pocket. And so, having paid Pol the additional 24€ to park at his house rather than the hospital, they departed.

Thus, as G and Grimble negotiated the Auto Pista 7, giggling each time Satnav lady said pista and deliriously happy that she was now saying place names in Spanish with a voice tone that implied she would cut you given half the chance, they decided that, lovely though it was, this Costa was not for them. They were off to a place that Grimble had thrown into the equation barely a few days before departure. A retreat hotel somewhere in the mountains above Tarragona with a name that Grimble kept forgetting and hoped that Satnav lady didn’t have the same memory loss.