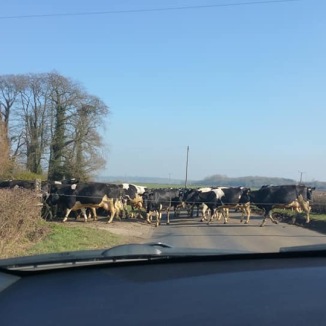 They’d only gone and done it! They’d left Blighty behind, 3 weeks before the deadline of one of the biggest political changes of their lifetime. Not that this had anything to do with their decision to leave. Their decision had been to leave UK to join Europe. No votes, referendums, meetings required. Just an overwhelming certainty that there was a better life awaiting them in Spain.

As Grimble rocked like a deranged person on her Brittany Ferry cabin bed, she reflected on their last few months. Well, actually, she was attempting not to think about just how fucking choppy the sea was. This ferry, a mere 16 hours late due to inclement conditions, had wildly tossed G and Grimble throughout the night. At one point, when G emerged from the loo, his body movement was akin to flying such was the surge and sway. A naked G missile was not something Grimble expected or needed as her tummy churned like a washing machine.

Their worldly possessions has departed for Spain just after Christmas. Though looking at their car, it seemed that they had possessed themselves of a second set. With an SUV rammed with goodies: patio table and chairs, footstool, cases packed with smaller sized clothes and cushion covers, they had embarked on the crossing from hell. The one night onboard had mutated into two. It was now mid afternoon, 17 hours in and the storm was unrelenting. There was no way that this could ever be conceived as a mini cruise. They’d confined themselves to the cabin.

On the plus, Grimble’s KETO diet was going swimmingly. More due to the fact that she had imposed a nil by mouth fast as to eat anything required leaving the relative safety of her bunk. In addition, she realised that her stomach was not going to readily digest anything she ate and barfing onboard was something she really wanted to avoid.

The last few months had seen a few changes in their preparation for departure. The beloved boat had been sold. Thus removing the last possession tie with the land of their birth. Grimble had held a fanciful notion of holidays on the river in the basking British sunshine. However, G had earthed those dreams by pointing out last summer’s sunshine was a fluke and paying a year’s mooring fee, insurance and license for two weeks’ of rainy UK misery wasn’t really a plan. Especially, when they had a sunny villa in Spain to relax in. The boat had been an awesome and spectacular way to enjoy life but it’s time was over. Now, as this ship went into roller coaster mode once more, Grimble felt that her time with things nautical was done.

Dog sitting. This is how Grimble and G had spent the last two months. On paper, another excellent idea. They had lived rent free whilst tending to a pug and Labrador: an incongruous dog partnership for sure. They’d never done anything like this before and probably would never do it again. Well, if there was a next time, Grimble would be sure to ask more probing questions.

As it was, the dog sit was more a decoy to allow the owners to continue their rather lucrative Airbnb business in several reformed barns whilst sunning themselves on a Caribbean beach for two months. The idea was presented as simple enough. Just putting the keys in the four barn doors. What they failed to mention was that paying guests are demanding. Hence, each weekend was punctuated with a series of WhatsApp messages from guests to the Caribbean to G and Grimble in the house next to the Airbnbs for different towels, more heat, no oven working, smoke alarm pinging. It became abundantly clear, that G and Grimble were actually managing the business for free, whilst the owners sunned themselves. At £125 a night per unit, it didn’t require a Maths degree to work out why they were on endless rum punches for two months. 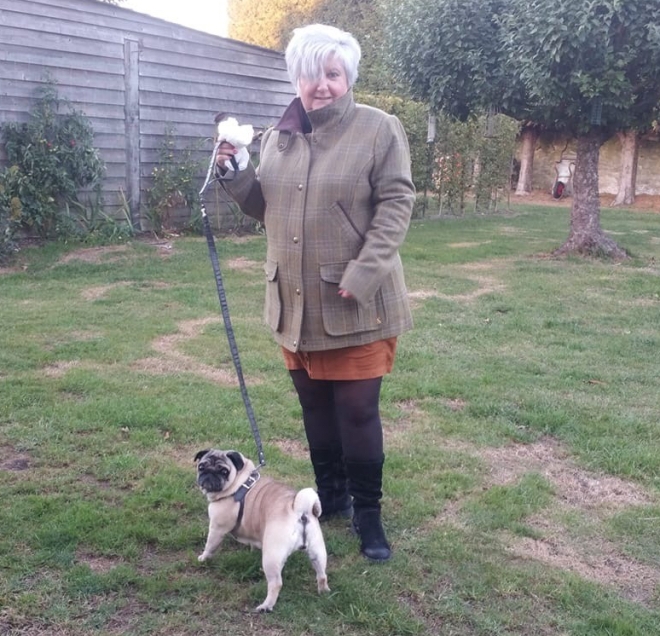 Of course, the loving nature of man’s best friend might have compensated for this outrageous use of G and Grimble’s time for nothing. Sadly, this was not the case. Hindsight is wisdom. Clearly, the question should have been asked as to why any dog loving owner could leave their treasures for 2 months with strangers. G and Grimble did get a rent free stay in a 17th farmhouse with no insulation in the depths of winter. The owners got no kennel bills and basked in the Caribbean sunshine. They were canny buggers. They’d even set the heating to a paltry hour a day (soon changed). Like any family with absent key members, the dogs were dysfunctional.

The Labrador was a majestic 18 years old. It had been explained that this right old age had given way to incontinence issues. G and Grimble felt sympathy with this grand dame of the dog world. However, the owners failed to mention that the pug also shitted at will because she was simply an untrained little fat fucker. She had this horrible knack of both eating and shitting simultaneously. After several fraught days, the only solution, given the folds of skin around her overly chubby face meant rubbing her nose in it was not an option, was to place her and bowl in the garden. She still synchronised her shit with troughing but it was marginally less offensive on grass than the kitchen floor.

Not once did the owners ask after the welfare of their dogs. Their act of concern was to dig the Labrador’s grave at the back of the garden before they left. Wickedly, Grimble thought there was more chance of the fat shitting pug being in there when they returned. Unfortunately, and unexpectedly, G and Grimble had to leave just two short hours before the owners arrived back having cleared the last bit of pug poo from the doorstep. The owners had hoped that they’d been back in late autumn to dog sit for another couple of months. Sitting two shitting dogs and managing an Airbnb for nowt or sitting on their terrace in the warm Spanish sun: tough choice.

Thus with half a day of stormy sailing before Spain, the UK ties that mattered: friends were kept and the others were cut forever. Given their age, this was likely to be G and Grimble’s final big adventure and they were determined that it was going to be the best.